Withington funded and developed a library at Old Moat Primary School, as part of the ongoing links between the two schools.

Withington has maintained strong links with Old Moat Primary School for many years now, through activities including our Sixth Form Volunteering Scheme, annual ‘Citizenship Day’, sports days, a Classics programme, and provision of staging in their hall.

In September 2015, Withington worked with Old Moat to develop a new library with funds raised by a sponsored spell at Withington.

The project was coordinated by Withington’s Head of PSHCE, overseeing the fundraising, collection of books, and physical construction of the library space.

Withington donated over 500 books, and raised over £3,500 to buy shelving for the library. Some of the money also went towards the banded scheme books which the pupils take home every week. Withington provided librarian badges to encourage the primary school pupils to become actively involved in the running of the library.

All pupils in Years 2, 5 and 6 now have access to a well-stocked library of over 3,000 books. Old Moat hope to open it up soon to Year 3 as well. Teachers use the library for lesson research and to find stories to read aloud to the younger pupils.

The library is run by a volunteer librarian and has been restocked by Withington pupils, so the entire project has cost the school nothing and taken up no staff time.

Withington pupils from Years 7 to 9 participated in the ‘Sponsored Spell’, which raised over £2,000.

In July 2016, Year 7 pupils, assisted by the Lower Sixth Form, volunteered their time to visit Old Moat during Withington’s annual ‘Citizenship Day’ to set up the library. They sorted through donations, covered books in sticky-back plastic and organised shelving. In July 2018, Year 7 volunteers returned to Old Moat to sort through more recent donations to the library.

In July 2019, girls returned to Old Moat to cover books and sort out stock.

Withington has provided continuing financial and practical support with the library since its conception and will do for the foreseeable future, alongside the various other partnership projects run with Old Moat. 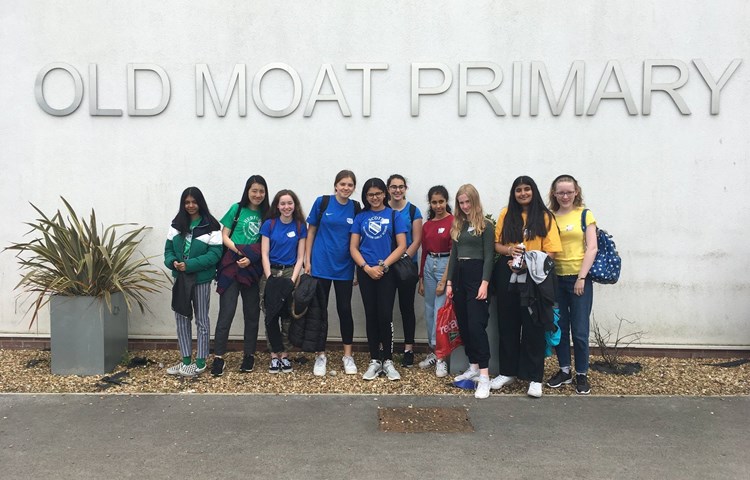