On 29th January, the LEH and Hampton High Drama Departments hosted a conference to launch Write the Girl, a commissioning process for playwrights wanting to create challenging, female-driven narratives for large casts. The day was a resounding success with over 60 established and emerging writers in attendance: the details are here: write-the-girl

Our keynote speaker was Morgan Lloyd Malcolm whose play ‘Emilia’ premiered at The Globe to rave reviews and is about to transfer to the West End; her play ‘The Wasp’ is also a favourite text of our students and is regularly used as a GCSE and A-Level piece. Morgan spoke of the need to tell the stories that had been ignored in a male-dominated world; stories of incredible women whose voices had yet to be heard. This call was echoed by some of our very own LEH teachers who spoke about their subjects and, in particular, the women in their field who deserved to be celebrated on stage.

An essential part of the day were student performances, underlining to the writers what fantastic work young women are capable of. Ana Martin (alumna) and Shahin (Hampton School) reprised their roles of Eurydice and Theseus from Buffini’s ‘Welcome to Thebes’; Sadie (UVIH) and Holly (UVIG) performed their A level extract from Kirkwood’s ‘Mosquitoes’ before getting their broad swords out and joining Natasha (UVID) in a battle sequence from Bernay’s ‘Boudica’. These performances encouraged the writers to think ambitiously, challenging them to create thought-provoking, demanding material for students to sink their teeth into.

By the end of the day students, teachers and writers were all buzzing with excitement and inspiration.

We are now very excited to start receiving submissions from the playwrights who attended and then we will be workshopping some of their material with our students in the summer term. This is only the beginning. Here we go…! #WritetheGirl 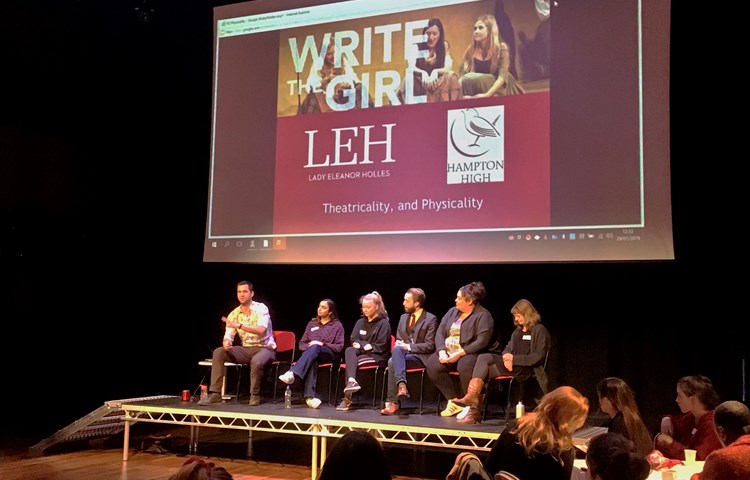