Marine AFC and Merchant Taylors’ School share not only a street in the town of Crosby, near Liverpool, but also a commitment to sporting endeavour and an instinctive desire to play a positive and active role in our local community.  It is little surprise, therefore, that our two esteemed institutions should have a long history of acquaintance.

However, in the past two years we have worked hard to develop that neighbourly spirit into something much more tangible and effective. We have tried to get to know one another, understand what drives us and look for ways that we can work together, invariably to the benefit of others.

This has manifested itself in a number of ways, particularly around the work of the club’s charitable arm, Marine in the Community, which runs various projects to improve the lives of vulnerable people in the local community and use grassroots sport as a force for good with projects such as free dance classes for local schools, food parcel deliveries and walking football.

One example of this partnership in action saw our Sixth Form boys visit the homes of elderly local residents, delivering food and company at their doorsteps. This volunteering project was organised by community managers at MITC and also involved a choir of boys’ singing carols at residential care homes in the run up to Christmas 2019. While this was understandably not possible in 2020, we hope to be able to involve boys in similar activity in the near future.

MITC also ran an art competition asking local primary school children to draw pictures depicting love, joy, compassion and kindness for a charity calendar entitled Hope & Faith, which would be sold to raise funds for its vital work. Merchant Taylors’ was asked to judge the competition and we provided overall design and print of the calendar free of charge via our inhouse team.

Our partnership also runs into more operational matters for the club, which had been struggling to find suitable space for its first team to train away from their College Road home. We were able to offer them a regular slot at Hall Road, our 25-acre sports ground comprising numerous grass pitches for football, rugby, hockey, cricket and various other pursuits, while they also trained on our main school field and made use of our gym facilities during the summer months.

The timing of this new arrangement could not have been more perfect for the Northern Premier League side, as they were drawn at home against the mighty Tottenham Hotspur - complete with Messrs Mourinho, Kane and Bale - in the third round of the FA Cup in January 2021. The side trained hard at Hall Road as anticipation grew around the area ahead of the televised match.

To show our pride at their achievements, we asked a dozen local independent businesses to join us in a short video, voicing their encouragement to the team. The video featuring the local butcher, hairdresser and estate agent, amongst others, was shared extensively via social media and referenced during the live BBC commentary.

The club gave us space in their official programme and we bought pitchside advertising at the ground, while we also stepped in to accommodate the BBC and Tottenham Hotspur staff and vehicles on the school grounds on the day of the big game due to space limitations at Marine.

Our partnership continues to flourish as we explore new ways to support each other. Marine has recently developed a new bar and bistro at the ground and we have supported their plans to create a new 4G community pitch. As we hopefully approach post-Covid times, we also hope to hold joint sporting and fundraising events.

In the maelstrom of media noise that surrounds Premier League or UEFA competition, it is easy to forget the unique impact that clubs such as Marine have on their local communities. We believe that this special role should be nurtured and we will continue to do all we can to help magnify its power however we can. 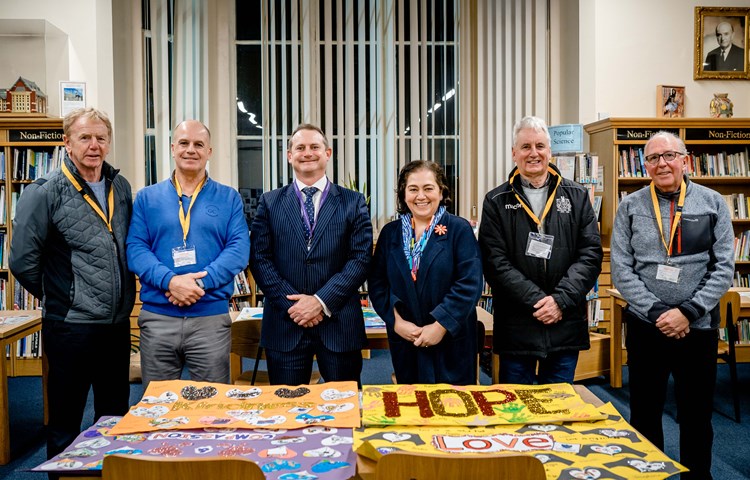