The pupil-led Environmental Team continues to work towards its goal of attaining Green Flag status, having achieved a silver award this year. They have organised recycling initiatives, and two year groups embarked on a litter pick in St Nicholas Park and Priory Park.

Headed up by the Green Team (a group of students and staff), ‘single use plastic boycott’ has been launched at an assembly. A video clip of ‘Blue Planet’ showing the amount of litter, mainly plastic, found on beaches and how wildlife, especially birds, are killed due to this litter, was incredibly thought-provoking.

The new implementations are now in full swing with packed lunch packaging changed to paper bags and sandwiches wrapped in paper rather than film. The students are all being encouraged to remember to bring in their own reusable water bottles from home each day. Single use pudding pots have gone and been replaced with reusable ones, as have single use soup cups which have been replaced with ceramic bowls/cups. Polystyrene containers for salads and jacket potatoes have been replaced with compostable containers. This has been rolled out into the staff room too, where ceramic cups will now be used.

Warwick School has been recognised as a Recycling Collection Point by Walkers Crisps, who will collect directly when 400+ bags have been collected. Boys have been asked to use the crisp recycling boxes in each department, where they can recycle not only Walkers crisp packets but any foil-lined crisp packet, any brand!

The pupils have also been challenged with influencing the ‘single use plastic boycott’ at home by taking their own bags to the supermarket, choosing loose fruit and vegetables (rather than pre-packed), buying cans not bottles, using reusable water bottles and bringing crisp packets in from home to be recycled. 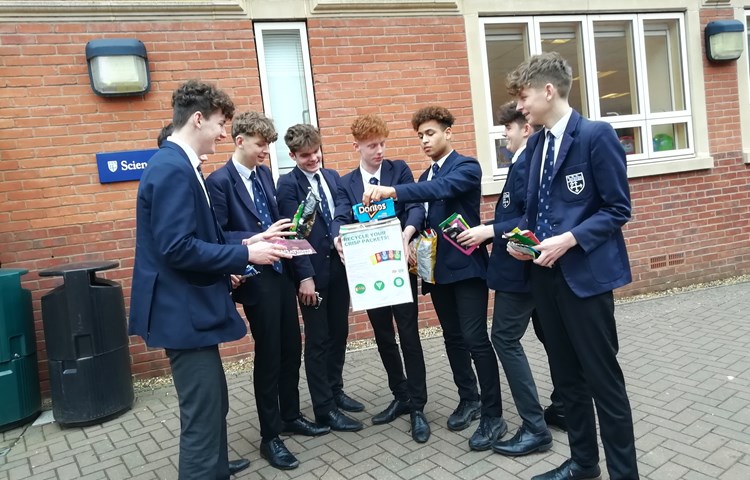