Petersfield Youth Theatre (PYT) was founded as a registered charity in 1990 to advance education in music and theatrical arts amongst children and young people aged 5-23 years. It aims to provide a nurturing, educational and fun environment for young people who are interested in theatre, whether their desire is to build confidence and make friends, or to work in the professional world of theatre.

The aim of this partnership is to promote participation in the arts, providing opportunities for young people from all backgrounds to participate in high quality theatre activities and productions, and to enable PYT to re-invest as much as possible into its education programmes.

In addition to partnering with state schools, Bedales supports a number of local clubs and charities that widen educational opportunities for young people.

For over 25 years, Bedales has been associated with PYT - who hold popular annual holiday workshops and impressive theatre productions at school.

Bedales provides PYT with facilities for workshops and performance spaces.

There's more information about PYT on their website here.

PYT is run by a small group of enthusiastic staff and volunteers, who employ theatre and education practitioners to direct productions, workshops and projects. PYT makes a small charge for participants.

Bedales offers PYT a heavily subsidised rate to cover costs. There is also usually a requirement for some support from Bedales Facilities staff for PYT events.

PYT has run workshops and produced plays and musicals since its first production in 1990 of 'Our Day Out' through to its 2019 production of 'The Lion, the Witch and the Wardrobe'.

PYT has averaged 250 members per year since its inception. There are often up to 130 young people attending the holiday projects that are run at Bedales.

Everyone involved in PYT is passionate about offering the ultimate theatrical experience for young people as well as performances with the highest production values. Many professional careers have been launched through participation in PYT, though this is not the ultimate aim of the group. Their goal is to instil confidence, teamwork and being able to take and accept direction – all of which are readily transferable skills for further education and the world of work.

“Bedales has played such a big part in PYT over the years and we are always so very grateful for your support which means so much to us.”

“At a time when arts education is coming under significant government scrutiny and funding cuts, we are delighted to support Petersfield Youth Theatre in providing such life-enhancing educational opportunities for young people. Bedales' long-standing reputation, first class facilities for the performing arts and hosting of PYT over the years, mean we are natural partners with this tremendous organisation.”

PYT attracts participation from all the local state and independent schools in Petersfield and surrounding areas, enabling long lasting friendships to develop across schools.

Bedales hosts an annual, week-long PYT Easter Project, which attracts in excess of 120 young people aged Years 1-7. This involves various music and singing workshops, culminating in matinee and evening performances, with West End professionals and a live band. This project is open to all young people in Petersfield and surrounding villages. For many this will have been their first exposure to theatre.

PYT also holds a week-long Summer School at Bedales, for years 5-12, where the focus is on having fun through learning theatre skills. These workshops prepare children and young people for the rigour and pressure of auditions, both for PYT and school productions.

PYT also runs termly workshops for smaller groups at their base in Petersfield. These are designed to give more opportunities to young people to embrace all things theatre and to hone, challenge and inspire their skill base, while also allowing them the chance to meet like-minded friends from outside their school environment.

Other events run on an annual cycle and include a full scale musical theatre production in September and again at Christmas.

In 2021 to enable compliance with COVID restrictions on indoor gatherings, Bedales made available its sports pitches, centred on the sports pavilion, facilitated by on-site parking. PYT obtained a community grant to hire marquees to create compliant facilities for these workshops. In total 124 young people welcomed the chance to revive friendships, make new friends and work together on creative skills. The young people spent six days working with Musical Directors, Choreographers, Drama skills professionals and Puppet makers.

In 2020, PYT worked on a creative lockdown project, producing a film of songs and interviews to celebrate its 30th birthday, which featured a number of pupils, staff and venues in and around Bedales.

Recent productions have included 'Singin’ in the Rain' and 'The Lion, the Witch and the Wardrobe' - with students from Bedales working alongside pupils from other local schools.

Looking ahead, 2021 productions include Disney’s 'The Little Mermaid' and 'Elf - the Musical'. 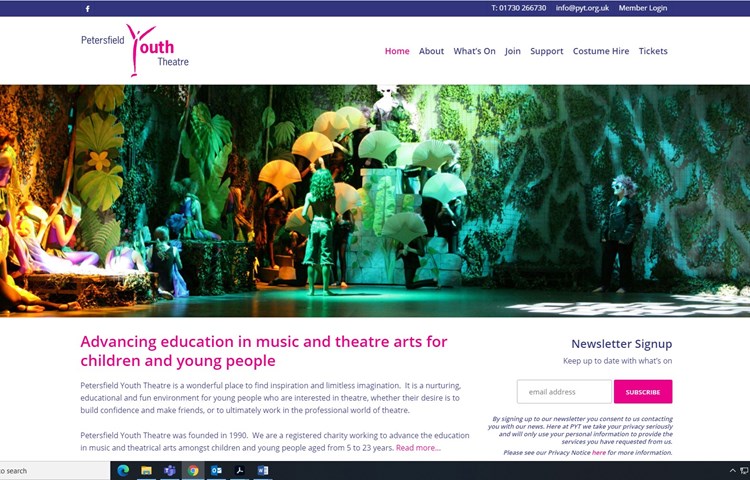