On Tuesday 5 July Dulwich College were delighted that Economics students and staff from five other SSLP partnerships schools joined our own Year 12 students for a day of talks and workshops on the theme: Using Economics to make the world a better place. This was the second such conference and the first we were able to host in-person at Dulwich College.

The students were split into two groups in the morning, each hearing from two guest speakers. One half heard first from the macro hedge fund manager, economist and author Eric Lonergan, on his book Supercharge Me: Net Zero Faster and his suggestions for how to use Economics to tackle the climate crisis, before listening to Aishani Roy, Deputy Director of Macroeconomic Assessment at the Treasury on the current outlook for the UK economy and what government economists can do to help improve economic performance. The other half of the conference heard first from Dr Christian Krekel of the LSE who spoke about his research on the Economics of Wellbeing and how this might be applied to policy to improve living standards, before Azeem Azhar, technologist, investor and author of the book Exponential, presented his thesis of how the exponential rate of technology growth is changing society and what we might need to do to adapt to it.

The students were then split into four workshops, one for each talk, in which they worked collaboratively with peers from other schools in small groups to prepare a short presentation. To conclude, the day finished with all participants in the Great Hall to hear a welcoming address from the Master, a competition between the winning pitches from each workshop, and a final panel discussion which explored careers and courses using Economics and the future of the subject itself. The winning pitch came from a team of students from Charter School North Dulwich and Dulwich College who presented the key change they would make to the education system to prepare young people for work in the 'Exponential Age'. We were then lucky to welcome Beatrice Johnson, an alumna of Queen's College, London now studying on the Bank of England's Professional Economist Degree Apprenticeship scheme, and Phil Pickard, who acts as a liaison between the SSLP and the Worshipful Company of International Bankers, and also represented the social mobility charity The Brokerage, to join Eric Lonergan for a fantastic panel discussion.

uge thanks must go to all of our guest speakers and panellists, who provided an inspiring and thought-provoking day of Economics, to all of the support staff at the College who helped the day run so smoothly, and in particular to Katie Barretta for all of her organisational support and encouragement. We look forward to another fantastic conference next summer. 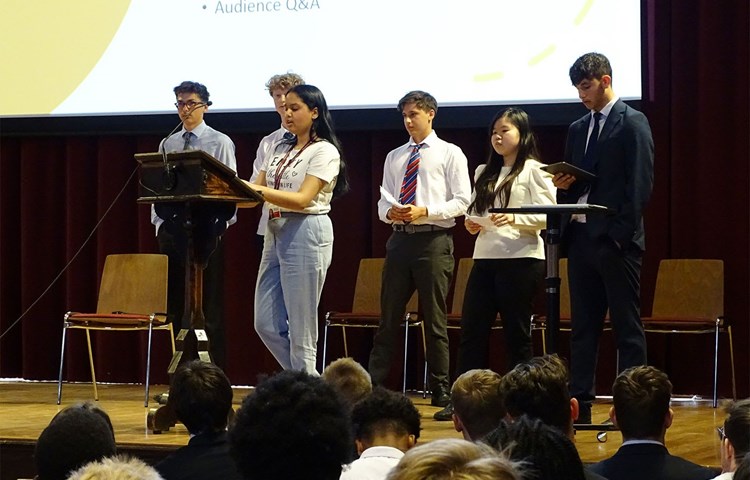